How do your thoughts and dreams when you were ten-years-old match with your reality today many years later? 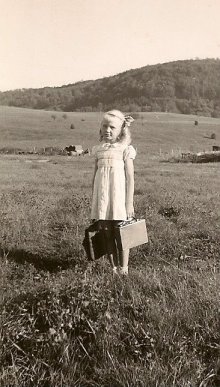 g up on an upstate New York dairy farm during World War II, I learned to love acting in a one-room schoolhouse. Our small movie theater showed the popular musicals as soon as they left the big city theaters. I loved the idea of singing, dancing, and acting in front of large audiences.

Audiences were not easy to come by, but I had one built in for my convenience. Our dairy barn had two rows of cows which faced a large open area Dad used for feeding them. Standing there I could act out my dreams to an approving audience. As an adult, I had roles in several plays. It was one of these that showed me how difficult it would be as a professional having to go on stage night after night.

My alternate dream was to be a teacher like Mrs. Parsons, my country school teacher. She was my ideal as a teacher. After I graduated from Fredonia State Teachers College (as it was named then), I tried to emulate her. Teaching children to read was a joy for me, especially when I saw a child suddenly ‘get it”—and understand all those squiggly marks on the pages of a book.

In our two-shelf country school library, there were several books about foreign countries which I loved to read. As a ten-year-old I fantasized about being in those countries, but didn’t believe I’d ever walk their streets and travel their roads.